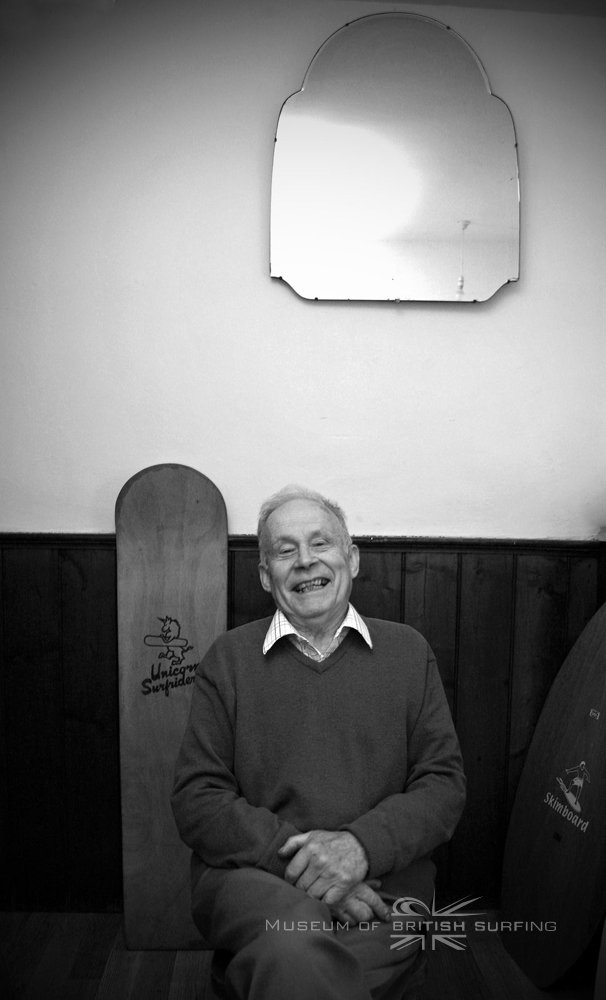 It is with great sadness that we report the passing of Dick Pearce, who shaped traditional wooden surfboards in North Devon for the last fifty years.

Thousands of British surfers got their first start on one of Dick’s famous ‘surf riders’, and it’s a fitting tribute to him that they’re now going through a revival on our beaches and even have their own world championships.

He passed away peacefully at Eastleigh Care Home near his home in South Molton on Saturday July 10, 2010 aged 81. He’d had cancer for the last decade but only stopped working full time in the last year.

The Museum of British Surfing team send their condolences to his wife Sue, son Tom and daughter Catherine.

Sue paid tribute to him; “He loved the countryside, his family and local history. He was such a generous man and would always turn himself inside out to help others. I had 48 years of fun and laughter with him. All he had and all he wanted was right here in North Devon and he was a contented man. In the end there aren’t too many of them around, are there?”

Dick ran the family tannery in South Molton (a building he worked tirelessly to preserve) and with others including Roy Wilson, diversified into making and selling surfboards and beach products around 1960. He developed a winning formula for his famous little boards & continued making them with great success in exactly the same way for five decades.

The business is the last known manufacturer of the classic wooden surfboard, and Dick was delighted to see the creation of the World Bellyboarding Championships held at Chapel Porth, Cornwall each September.

We first met Dick almost a decade ago when he kindly donated some of his early surfboards to the museum – a gift we’re truly grateful for. He was always very supportive & it’s sad that he won’t be around to see the museum open – with his boards on show – next year (2011).

Surf museum founder Peter Robinson said; “He was a true gentleman, a dedicated Devonian & family man, who perhaps unwittingly started many thousands of people on the road to a life with sand between their toes and an obsession with surfing. His surfboards and his approach to making them are classically British. I’m sure he’s passed away happy that he has left a wonderful legacy for generations of surfers.”

Many thanks to John Isaac, a skilled proponent of sea sliding, and photography, for the wonderful portrait of Dick Pearce.

If you would like one of Dick Pearce’s traditional wooden surfboards, they can still be bought through our friends at The Original Surfboard Company run by Sally Parkin in Devon.