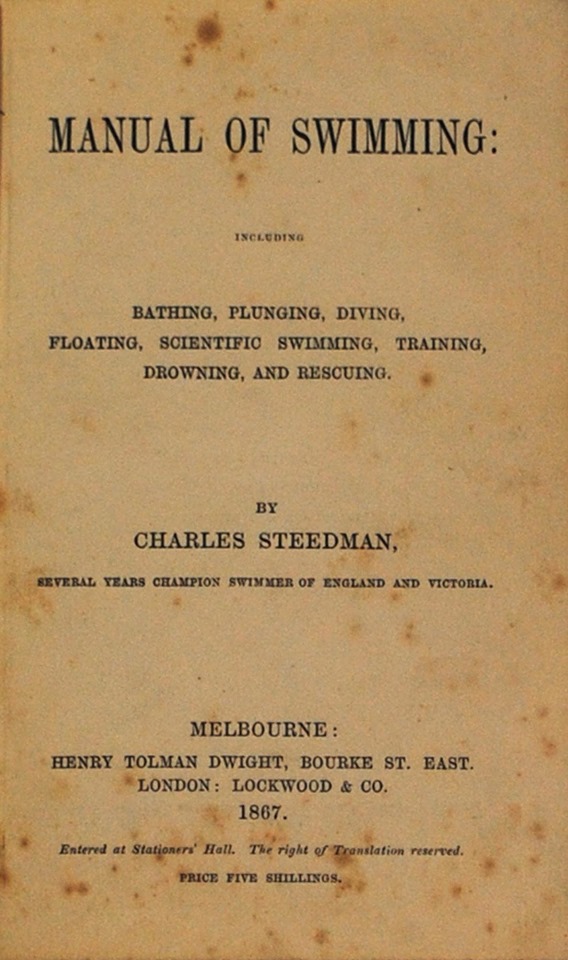 In 1867 English swimming champion Charles Steedman published his Manual of Swimming, where it mentions the use of a surfboard: ”A small deal board, about five feet long, one foot broad, and an inch thick, termed a ‘surf board’, is of considerable help to a swimmer who is crossing water on which the foam is deep – for by its aid he can raise his head to breathe above the surface of the foam.”

Despite Steedman’s identification of the craft as a “surf board”, it is unclear if and where he observed this in practice be it in England or Australia (where he emigrated to) or somewhere in between.

Steedman also reports of a fatal experiment in Paris with an early model of what eventually became known as the surfoplane, and subsequently replicated around the world as the rubber surf-mat.

He talks about the Harzards of Testing Life Saving Apparatus:

“The stereotyped verdict of “found drowned,” which one so often comes across in the daily papers, should in a large number of instances be changed into “death caused by a most important feature in the physical education of the victim having been completely ignored, namely, the ‘art of swimming.'” Life-belts, life-preservers, life-buoys, and air-mattresses, air-pillows, &c., as means of assisting in preserving from a death by drowning, are, no doubt, valuable in their way, but their inferiority as safeguards to the legitimate method of sustaining the body in the water by swimming can not be better illustrated than by the fact, that not long since. in Paris, the inventor of a patent air-mattress was actually drowned, together with his assistant, through the mismanagement in some way of a specimen of his artificial life-preserving apparatus which he was exhibiting in public.”

With the onset of the holiday season and the influx of visitors to the beaches this warning is as relevant today as it was in 1867. Take heed folks and stay safe when using inflatables in the water.

You can learn more about the rich history and culture of British surfing by visiting the Museum of British Surfing in Braunton or checking out the surf history timeline on our website:

We are open 11am to 3pm Tuesday to Sunday throughout the holidays, and a kid, dog, surfer and non-surfer friendly.