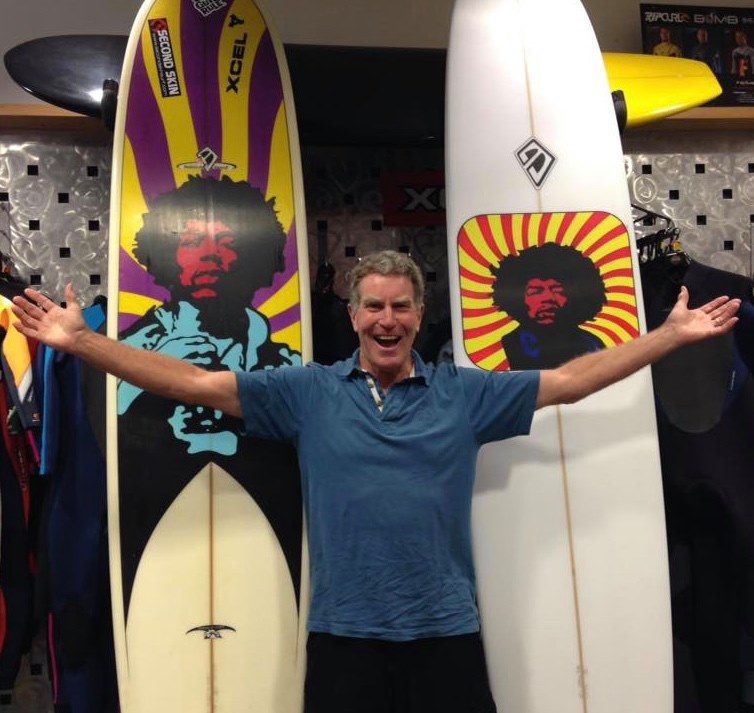 Here at the Museum of British Surfing we are surprised about how few British rock stars surf. The sport of riding waves is a great way of escaping the pressure of big crowds, media, paparazzi and fans, unless of course you’re hitting one of the popular bank holiday surfing hotspots with a camera crew in tow.

So here is a work in progress list of British born rock stars who actually surf and not just pop stars who pose with surfboards for publicity shots.

When he isn’t writing songs or recording music, is known to escape to the coast to surf. In a recent interview he was asked whether he thinks more about surfing or music. “Surfing,” he replied. “I think we all suffer from that.” Hell yeah!

Although no longer a resident in the UK, he is a passionate surfer and has been spotted surfing all over the United States, from Malibu to New York. Apparently he surfs to escape the Hollywood drama and the gossip. He must spend a lot of time in the water then.

Although born in England, he moved to the USA at the age of 10 and soon discovered a love for surfing and began his early music career with a fellow surfer, Donovan Frankenreiter.

This British-Australian band are based out of the self named European Surfing Capital, Hossegor. Not a bad place to be writing music and surfing.

Mickey Smith (A Blaze of Feather)

He is the artistic talent behind Dark Side of the Lens, along with some of the best surf films you’re ever likely to see. He was a semi-pro bodyboarder with a particular affinity for bouncing along dredging slabs and is now a talented musician. He has toured with two-time Brit award winner, and avid surfer Ben Howard.

The bearded bassist from British rock band Reef is a long time supporter of the Museum of British Surfing and often found cruising the waves in North Devon.

Lead singer and guitarist from prog rock legends Pendragon now resides in the south west and when not recording or touring can often been seen at his favourite break at Saunton, or Sri Lanka.

Please feel free to add to the list if you know of other British rock stars who surf.

And of course if they all want to get together and do a benefit gig for the Museum of British Surfing, I’m sure we could accommodate them!

You can visit the Museum of British Surfing in Braunton and immerse yourself in the rich heritage and culture of British surfing. We are open 11am to 3pm Tuesday to Sunday throughout the year.