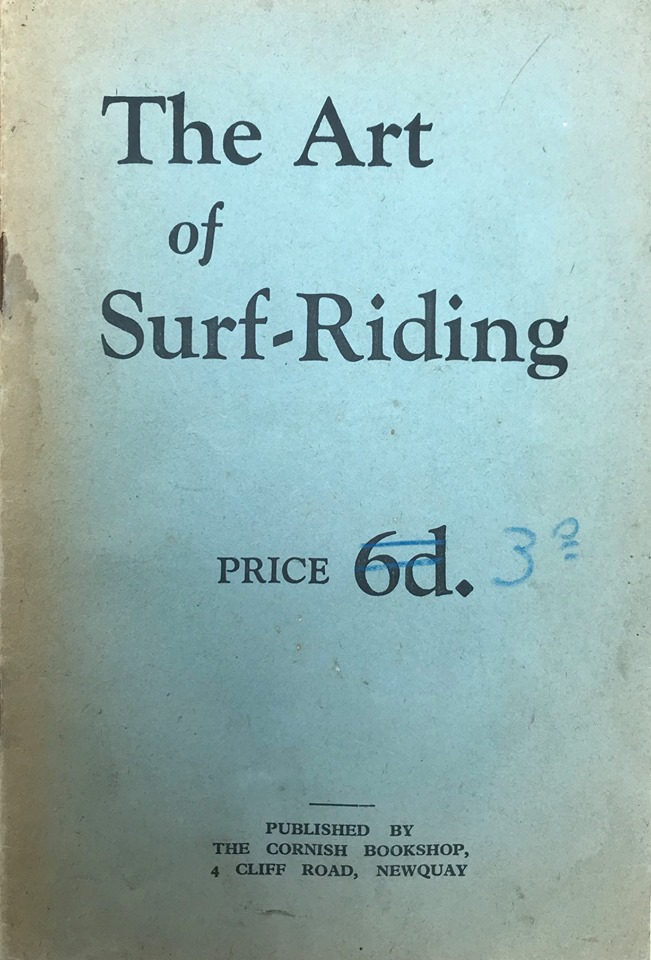 We are stoked at the Museum of British Surfing to have received this rare and important part of British surfing literature. It is one of the first surfing instruction books to be published.

In 1934, Ronald S. Funnell wrote and published “The Art of Surf-Riding”, but strangely until now no copies had been found.

At the time, bellyboarding, or surf-riding as it was known, was taking off in Britain and many copies must have been sold along with the Crest “surf riding” boards.

Around 1935 he also wrote and published through his Cornish Bookshop company “Newquay and Cornwall”, which included a how-to and where-to surf guide. It urged people to buy his previous book ‘The Art of Surf Riding’ and there’s an advert stating that if you buy a Crest “surfriding board” you’ll get a copy of the book free.

In 1953 “The Art of Surf Riding” was republished as “The Art of Surf Riding on the Cornish Coast” with A. Wheaton and Co. Ltd in an extended soft cover edition of 36 pages with 9 black and white photographs. It was an instructional pamphlet like publication that extols the virtues and dangers of surf-riding.

Many thanks go to Daniel Trent for donating the book to the Museum of British Surfing so it can be preserved and displayed for future generations to enjoy.

The booklet will be on show in the early surf-riding exhibit at the museum along with a photocopy of the booklet, available to read.

In the meantime, here it is for you to enjoy.

The Museum of British Surfing is open 11am to 3pm Tuesday to Sunday throughout the year. Call in and immerse yourself in the rich history and culture of British surfing.

We are always looking out for pieces of British surfing history. If you have old books, boards, photographs, magazines, memorabilia etc then please get in touch. Our key mission is to preserve and display the rich history of British surfing.