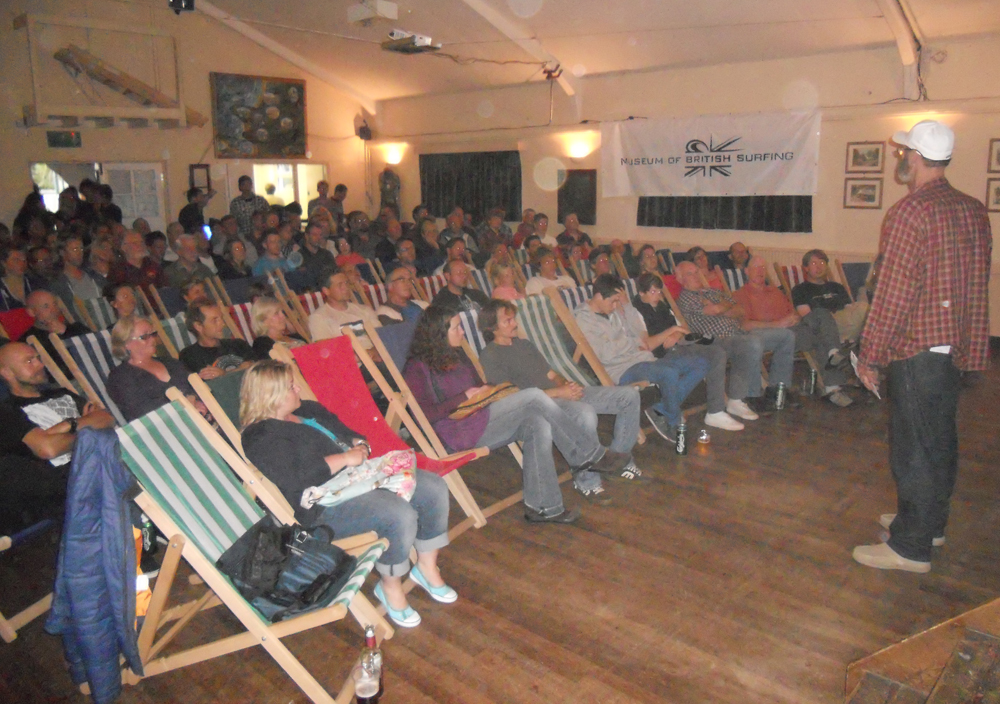 The event was a charity fundraiser for the Museum of British Surfing, along with a personal film masterclass by Jack the following evening in Braunton.

It proved to be another top night of entertainment with Jack talking story before and after the film, and a special screening of his short ‘Blue Sway’ – a collaboration with Sir Paul McCartney.

The film night was made possible by Chris Burrows from Croyde Deckchair Cinema who donated his services for the night, and with the help of volunteers Sophie Hellyer, Karma Worthington, Will Smith, Elliot Dudley and Nigel Tinsley-Such.

Raffle prizes were donated by Tiki, Skinner’s Brewery, Roxy, Finisterre, Gulf Stream, Nine Plus, Mellow Wave Surfboards and the surf museum. The prize draw raised more than £200 for the surfing museum charity, with Jack McCoy donating a signed baseball cap on the night to auction off.

“It was a memorable evening for us all,” said Museum of British Surfing founder Pete Robinson. “It has been an honour and privilege to have Jack visit the museum, see North Devon for the first time and share his wonderful new movie with us. It tells the story of surfing history, evolution and aloha in a fun, accessible and exciting way – super high quality and a must see surf film.”

‘A Deeper Shade of Blue’ is on a limited UK tour at the moment. It went down well with the audience in Croyde, many of whom had travelled from all over the West and South West to see it – with rapturous applause at the end of the film & lots of cheers and whooping throughout!

The film night, masterclass and raffle raised more than £400 for the Museum of British Surfing charity.