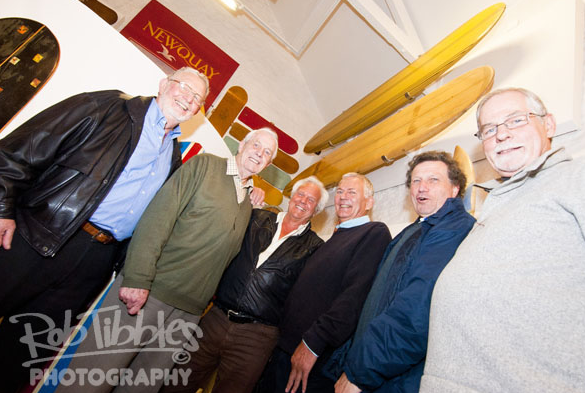 The Museum of British Surfing launch party saw legends of British surfing rubbing shoulders with current champions, grant funders and supporters from across the UK.

More than 150 people attended the event, sponsored by Skinners’ Brewery and Finisterre clothing, which featured an exclusive performance from Cornish musician Neil Halstead.

The night was the culmination of fifteen years work by founder Pete Robinson, supported by volunteers, friends and family – and the four trustees of the charity Richard Gregory, Hugo Tagholm, Andrew Coleman and Kevin Cook.

It was also the launch for the museum’s inaugural temporary exhibition ‘The Art of Surf’, which runs until Christmas 2012. The Museum of British Surfing team were supported on the night by volunteers from Croyde Surf Club, and are working in partnership with Surfing GB, Surfers Against Sewage and Surf Life Saving GB.

The Museum of British Surfing opened to the public for the first time on Good Friday 2012 at its new permanent home, at The Yard in Caen Street car park in Braunton. Each year it will feature a major new exhibition exploring different themes in surfing culture and history – delving into its massive collection to bring a fresh view for visitors.

See the slideshow below for images from the night, and you can see more of Rob Tibbles photos here. A film is coming soon.