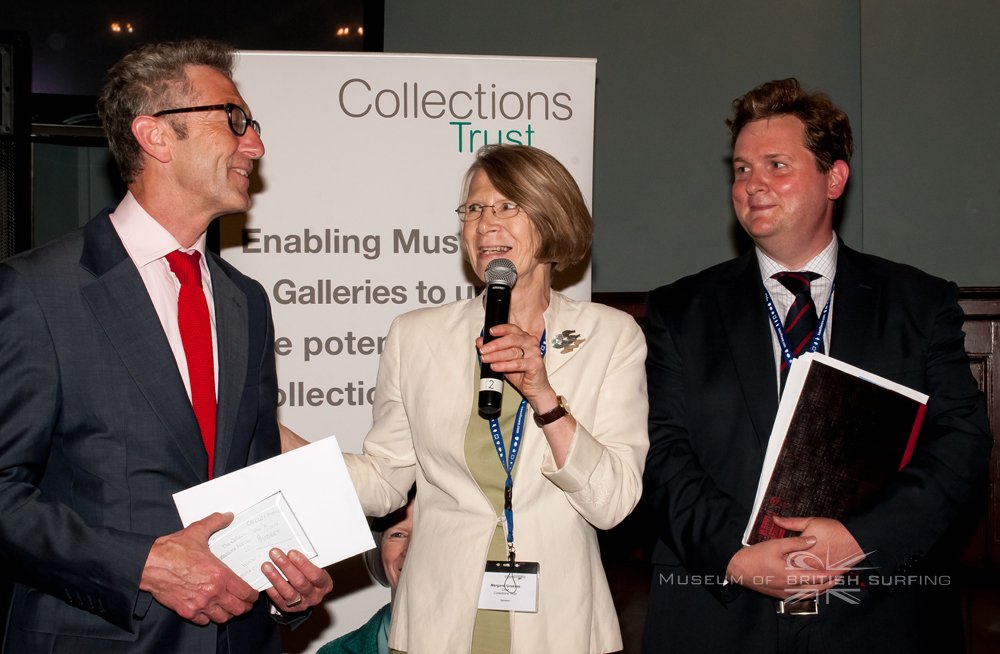 Less than three months after it opened the doors to its new permanent home in North Devon, the Museum of British Surfing has scooped a major national award.

It won the prize for being the best collection in the UK put together on a small budget, in the inaugural Collections Management Awards run by the Collections Trust – an independent charity that has been helping museums get the best out of their collections for more than 30 years.

Nick Poole, Collections Trust Chief Executive said: “We are delighted that the Museum of British Surfing has been awarded the ‘Collections on a Budget’ Award. Our judges were impressed by the museum’s socially and environmentally responsible approach to collections, and their engagement with the local community. This Award really demonstrates how, even on a limited budget, a museum can think creatively about their impact locally and globally.”

The nomination outlined our unique sustainability and social policy written by one of our board of trustees, Andrew Coleman, who was on hand at the awards ceremony at the Kia Oval on Tuesday night to accept the award. Andrew said: “‘I was stoked to receive this award on behalf of the museum from the Collections Trust at their annual conference.”

“It recognises the work we’ve done to make sure that the Museum of British Surfing not only fulfils its cultural and educational roles but also makes a positive contribution to the environment and local community. The museum is at the heart of a World Biosphere Reserve and the North Devon Areas of Outstanding Natural Beauty and surfing depends and thrives on a healthy environment.”

The Museum of British Surfing is aiming to be carbon and waste neutral, improve the local environment and also to support and develop activities for young people in the local area through volunteering and outreach.

The Museum of British Surfing opened for the first time on April 6th 2012 and has seen more than 3,000 visitors pass through its doors so far. Founder Peter Robinson said: “The Collections Trust award confirms we are on the right track and it encourages us in our aim of being a beacon of good practice for other museums and businesses. It is a great honour for us as a new museum & we’re really proud and delighted to have won.”

The main grant funding for the project came through Leader 4 Torridge & North Devon, North Devon Council, North Devon Areas of Outstanding Natural Beauty. It has been backed up by other small local grants, corporate supporters, public donations and fundraising.

The awards ceremony in London on June 26th was part of the two-day Open Culture event organised by the Collections Trust. The other award on the night went to the prestigious V & A Museum in London who picked-up the Collections Practice Award for improving sustainability in the use of its collection.

The surfing museum has been given a stylish glass trophy to display and a winner’s prize cheque of £500.

Surfing is worth more than £52 million a year to the North Devon economy and in excess of £100 million across Devon and Cornwall.

The pictures below show Andrew Coleman accepting the award on behalf of the Museum of British Surfing and making his speech. Awards ceremony photos are courtesy Peter D. Kyte. High resolution images are available on request.

Here’s a report on the awards from Museums & Heritage Online.