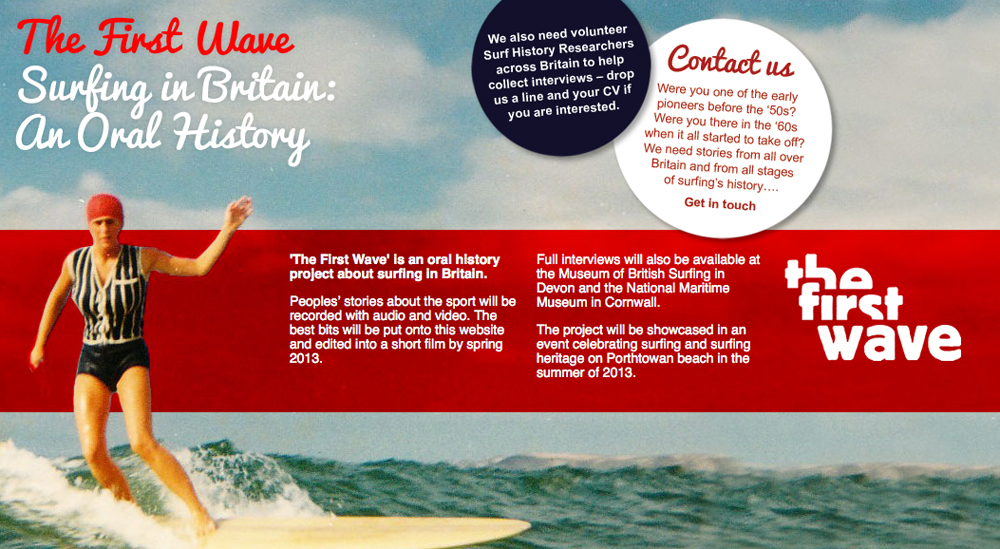 The Museum of British Surfing is partnering a new Heritage Lottery funded project ‘The First Wave’, that will film and record personal stories about the history of surfing in Britain

It was launched in Cornwall by longboard champion Ben Skinner at his old secondary school, where he was encouraging students to embrace surfing and its heritage. The First Wave will be interviewing people with memories about the early days of surfing across the UK and how it has changed over the decades.

Ben said: “The history of surfing in Britain is so interesting – with just a handful of pioneering people, some of them from Jersey where I was born, inspiring the thousands of people who surf today. So much has changed, even in the 20 years that I’ve been surfing. I think this is a great project and I can’t wait to hear the stories that emerge.”

Up to 100 interviews will be collected over the next few months and will be available next summer, at the Museum of British Surfing in Braunton, North Devon, the National Maritime Museum Cornwall and online later this year. Highlights of the interviews will be made into short films.

“This is a fantastic research project which will document the birth of modern surfing culture in Britain. ‘The First Wave’ will be collecting peoples’ earliest memories about a sport which has captured the imagination of many thousands of people in Britain and we are really excited to be working on the project.”

Roger Mansfield author of  ‘The Surfing Tribe’ sees this project as a celebration of surfing in Britain:

“This is an great opportunity for surfing communities across Britain to conserve and celebrate an important part of Britain’s heritage. ‘The First Wave’ also provides an excellent way for young people to embrace and explore our culture and heritage. The students inspired by Ben Skinner have already seen just how exciting it can be to get involved in the recording of our history.”

The project was started by Porthtowan Surf Life Saving Club. Chairman Adam Richards is looking forward to hearing more about the history of surfing in Cornwall, where the club is based, but also wants stories from surf spots elsewhere in England as well as Scotland, Wales and the Channel Islands:

“‘It is about ensuring that the history of surfing is told by as many people as possible. We want the stories from the early days to be told by those who were there. We would like people to come forward if they have any stories to tell about surfing in all parts of Britain – particularly from the 1970s and before.”

‘The First Wave’ is a project delivered by Porthtowan Surf Life Saving Club with support from the Museum of British Surfing, the National Maritime Museum Cornwall and the Cornwall Audio Visual Archive.