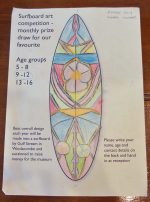 Lewis was picked from hundreds of entries that were drawn by children during their visit to the museum between May and December last year. His winning entry will now be shaped into a surfboard by Gulf Stream Surfboards in Woolacombe, North Devon and auctioned to raise funds for the surfing museum charity.

The final was judged by museum trustee Richard Gregory, a filmmaker & graphic designer, and award-winning shaper Jools Matthews the founder of Gulf Stream.

Richard said; “We both thought that Lewis’s drawing was colourful, bold, confident and holistic in its design. We’d like to congratulate him on a great piece of work – it is amazing how creative all the young people were during their visits to the museum. All the entries were great, and the finalists outstanding. Truly inspirational.”

The competition was open to children aged 5 to 16. A winning design was picked each month by museum staff & volunteers and seven went through to the final: Hazel Beale aged 16 from Kent; Cuba Chapman aged 8 from Somerset; Freya Axten aged 10 from Belfast; Lewis Morgan aged 12 from Wales; Finn Balmont aged 11 from Australia; Tom Dean aged 13 from Scotland; Tabitha Cook aged 11 from Lincolnshire.

The 2013 surfboard art competition is already underway, and as part of the Sixties SURFER! exhibition that’s open now we’re asking young people to come up with a winning ‘Malibu’ or longboard design – good luck!