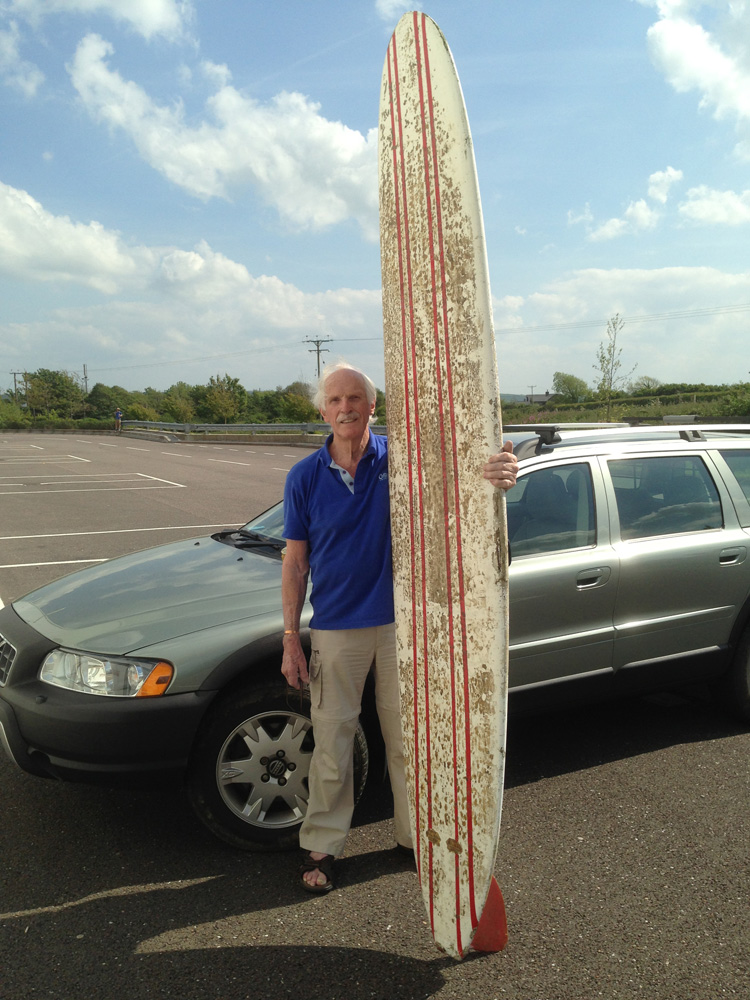 The owner of a rare Bill Bailey surfboard that he donated to the Museum of British Surfing was stunned to see the conservation work carried out by volunteers to reveal its original condition. The ‘Malibu’ board is the only one of its type known to survive, and is on display in the current British surfing pioneers exhibition – The First Wave.

Frank Hilder from Chester bought the 9′ 3″ surfboard second-hand around 1970: “I got it from the Tuckers, owners of Putsborough beach in North Devon – it was an ex rental board and they were changing to the new shortboards that were coming into fashion.”

When he donated the ‘Malibu’ board last year it was covered in yacht paint. Painstaking work took place over several weeks by one of our conservation specialists to remove the paint and reveal the original pigments used when the surfboard was shaped between 1962 & ’64.

It is a ‘Custom Bailey Malibu SURF-BOARDS NEWQUAY’, made by the man often described as the father of British surfing, the late Bill Bailey. Bailey went on to found the legendary European Surfing Company and Bilbo Surfboards in 1965 with Bob Head, Doug Wilson & Freddy Blight.

Bill Bailey was a Newquay lifeguard who started shaping fibreglass surfboards after meeting ex-pat Brit Doug McDonnell who was touring the UK in 1961 tracing his family roots and surfing (in Scarborough, North Devon and North Cornwall). He sold Bailey his Californian ‘Bragg’ surfboard, inspiring Bill to start making boards in Newquay.

The Museum of British Surfing, the national registered charity responsible the UK’s surfing heritage,  is looking for other Bill Bailey surfboards to add to its permanent collection, and also examples of  Bob Head’s ‘Friendly Bear’ Malibu boards, plus Stuart Surfboards from St Ives – please call us on 01271 815155 or email if you can help.

The photos below show Frank Hilder donating his surfboard, a close up of the Bailey decals on the deck before it was restored, and picture by the late Doug Wilson of Bill Bailey in 1963 with a similar board. If you have a surf or beach item from any era that you’d like to donate to create a lasting legacy of your surfing, please get in touch.