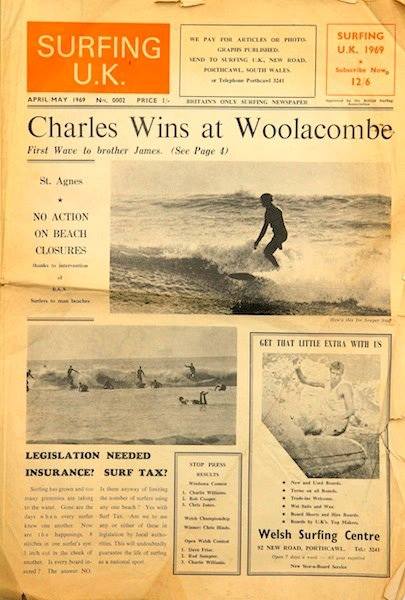 Surfing UK is one of the rarities of our rich surfing history and was the first surfing magazine. It set the trend for the many thousands of UK surf mags that have followed since the pioneering issues in 1969.

These are hard to find and we have yet to find a copy of issue no 1 which apparently was just a few typed sheets stapled together. If you have one tucked away, please get in touch with us at the Museum of British Surfing as we’d love to see it!

Surfing UK was produced in Porthcawl by Lindsay Morgan and sold in most of the surf towns around the UK. Issue 2 (as shown) was printed in a newspaper format and contained photos and adverts.

Sadly only 3 issues were produced and sold before it folded, due to poor sales, a lack of content, and insufficient paying adverts to help cover printing costs.

We are always looking out for copies of old surf magazines as we are putting together the definitive collection of British surf magazines with the long term objective of digitising them all and making them available on line as a searchable resource.