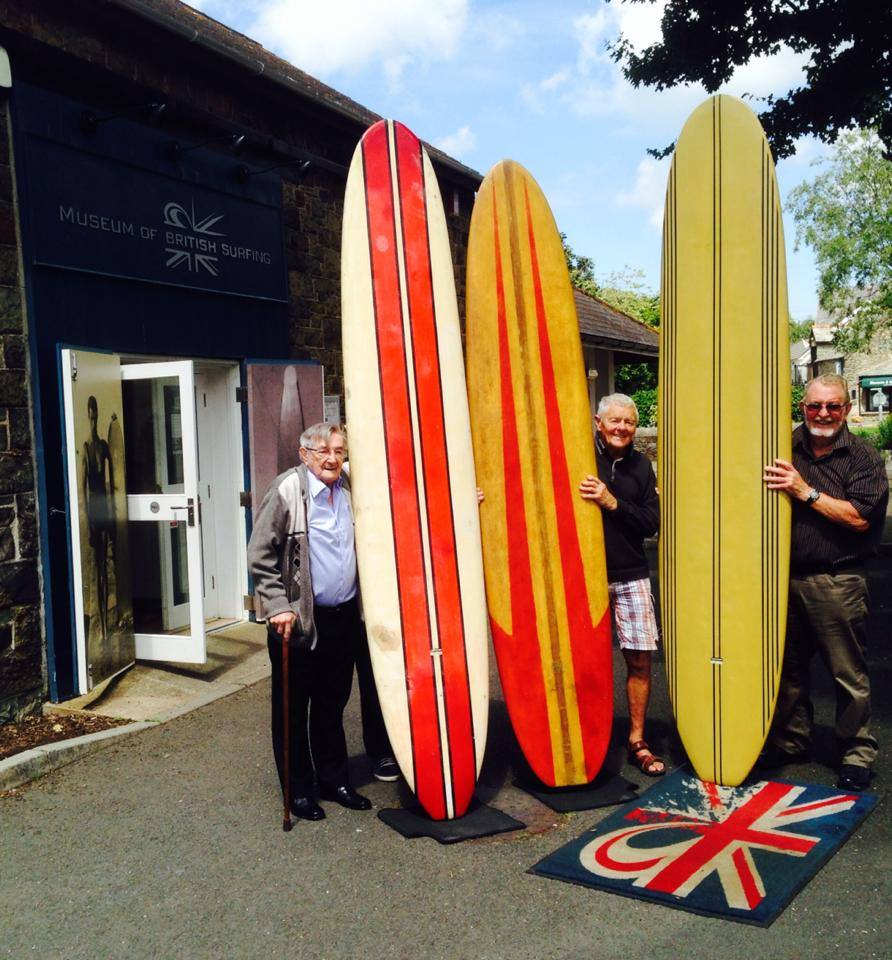 North Devon’s first wave of 1960s surfers were reunited at the Museum of British Surfing on Sunday.

The photo shows (left to right) Paul Latham, Peter Sandy and Alan Kift who were among the first to ride the ‘new’ fibreglass surfboards on the area’s beaches in the early 1960s; 50 years later they met to talk about the old days and have a look around the British surfing pioneers exhibition now showing at the surfing museum in Braunton.

In the photo in this post, Paul and Alan are both holding original ‘Power Boards’ shaped in Mortehoe by Bob Powers who was also present on the day. Peter is holding his ‘Friendly Bear’ Malibu board shaped by Australian Bob Head at Watergate Bay in Cornwall that he has owned from new.

A dozen surfers, some of whom are now in their 80s, gathered to reminisce on surfing perfect waves at their favourite spots with no one else in the water. In the ‘60s the boards were considerably heavier and there were no leashes so wipeouts often resulted in a lost board and a long swim to shore.

Alan Kift, who is now 76, told the North Devon Journal: “We were the first guys to start surfing at Woolacombe in 1963. It was completely empty, completely barren. We had the waves to ourselves.”

Alan and his friends are believed to have been the first to surf at Lynmouth, he said: “It was blowing a gale and all the beaches were closed out, so we went to Lynmouth and it was six to eight feet and perfect. The police turned up and said ‘What the hell are you doing?’ but by that time we were finishing our session. It’s a fantastic wave when it works but at the time we didn’t have leashes, so you did your best not to lose your board.”

“I used to like the bigger waves and if you lost your board and you were 300 yards out to sea, that’s a hell of a swim.”

Alan said he was delighted at the extent to which North Devon’s surf scene has expanded and dismissed what some surfers see as an overcrowding problem. He said: “There are different levels of ability and spots work at different times which thins the crowds out. We’ve got some of the finest surfing in Europe in North Devon.”

The Museum of British Surfing 2014 exhibition ‘The First Wave’ is on now, and tells the story of British surfing through the people who were there from a century ago to the present day. It features many previously unseen films, photos and interviews alongside an amazing array of original surfboards, memorabilia and surfing kit.

The museum is trying to find a ‘Friendly Bear’ surfboard by Bob Head for its permanent collection, if you can help please get in touch.