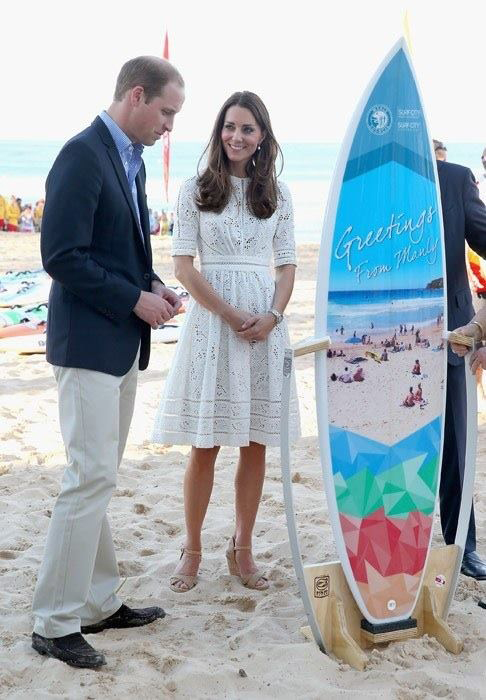 During their royal visit down under the Duke & Duchess of Cambridge were given a surfboard as a gift for their baby son Prince George.

The Bennett Surfboard with special artwork commissioned by the local council and valued at $2,200 Australian dollars was presented by the Mayor of Manly Jean Hay who said; “They were very pleased, Kate said they were looking forward to using it as they all loved the water. William said he would love to try the waves here.”

World champion surfers Barton Lynch and Wayne ‘Rabbit’ Bartholomew both offered to give young Prince George surfing lessons when he’s old enough. However, it could be his father William who pushes him into his first wave.

William surfed on his stag do with brother Harry at Speke’s Mill in North Devon under the watchful eye of local surfer & Gulf Stream surf shop manager Simon ‘Skelly’ Skelton. The Prince first took to the waves while at university in Scotland.

Or perhaps even grandad Prince Charles will take George surfing. Charles surfed in Cornwall and Australia and was patron of the British Surfing Association in the 1970s, even hosting the British surfing team at Buckingham Palace!

Surfing has always been known as a ‘royal sport’ from its origins in ancient Hawaii. One of the earliest photos of a Briton standing-up riding a wave on a surfboard is of Prince Edward, later King Edward VIII, in 1920 at Waikiki in Hawaii along with Lord Louis Mountbatten.