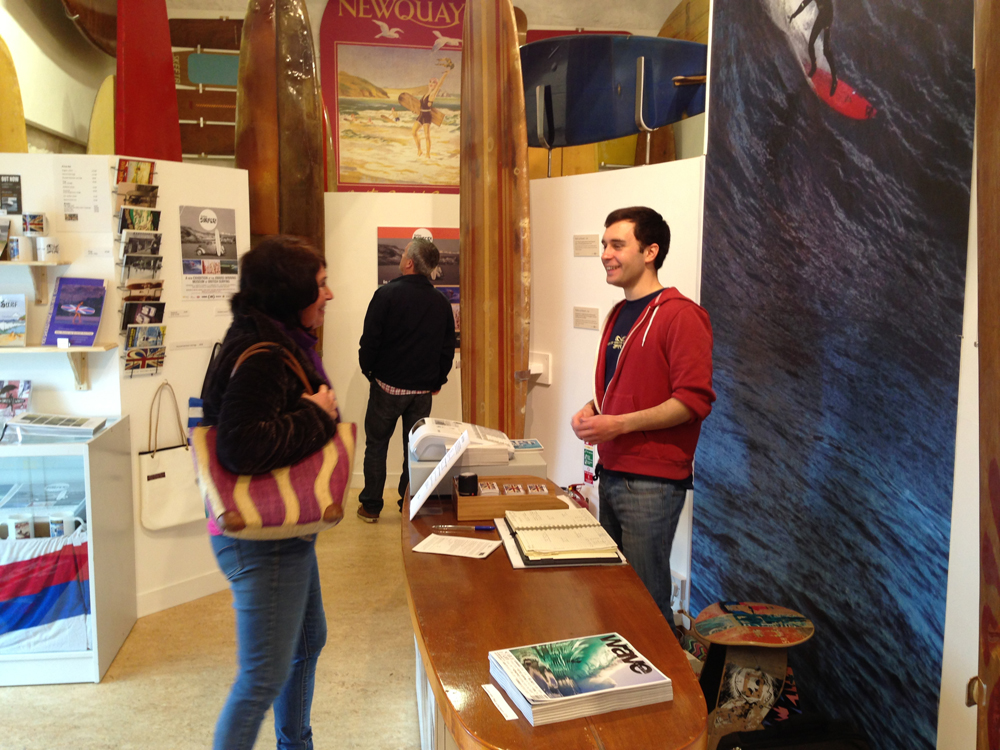 The new Sixties SURFER! exhibition at the Museum of British Surfing attracted surfing legends from the 1960s & 70s, and turned into an impromptu reunion for many who hadn’t seen each other in decades.

Among the 150 people who took advantage of our first ‘locals go free’ day of 2013 was multiple women’s surfing champion Jane Moss (see gallery below). She donated one of her fantastic 1970s competition wetsuits, given to her by former World Champion Jericho Poppler while on a surf trip in California 40 years ago.

Many unique items were donated and pledged to help expand the Museum of British Surfing’s public collection, including possibly one of the earliest skateboards in Britain (see the gallery below). Made by Paul Lawson in 1964 and used on surf trips to Woolacombe in North Devon to skate down the hill into the seafront car park.

Paul shaped a heavy piece of plywood and screwed on two sets of metal roller-skate trucks, so his board had 8 wheels! He later discovered that early boards in the USA had the trucks cut in half using just four wheels.

“The atmosphere was incredible all day, and I would say it was probably the museum’s best day yet,” said founder Peter Robinson. “To see so many locals and hear their stories of surfing going back to the 1950s in some cases; to hear the volume rise each time someone came across a surfboard or memory from their past – it was simply incredible.”

A big thanks goes to new volunteer Adam White, who came in for two hours to help and ended up staying the whole day (see main photo)!

As part of the display, instant photos are being taken of people who surfed in the 1960s and the pictures are being displayed in the reception area. It is planned to make a collage or book of them at the end of the exhibition.

Among the rare surfboards that turned up on the day was a 1970s swallow tail ‘Kneetrembler’, with stunning period artwork – more details on this soon.

The Museum of British Surfing is now on Spring opening hours which means we’re closed on Mondays except bank & school holidays click here for details.