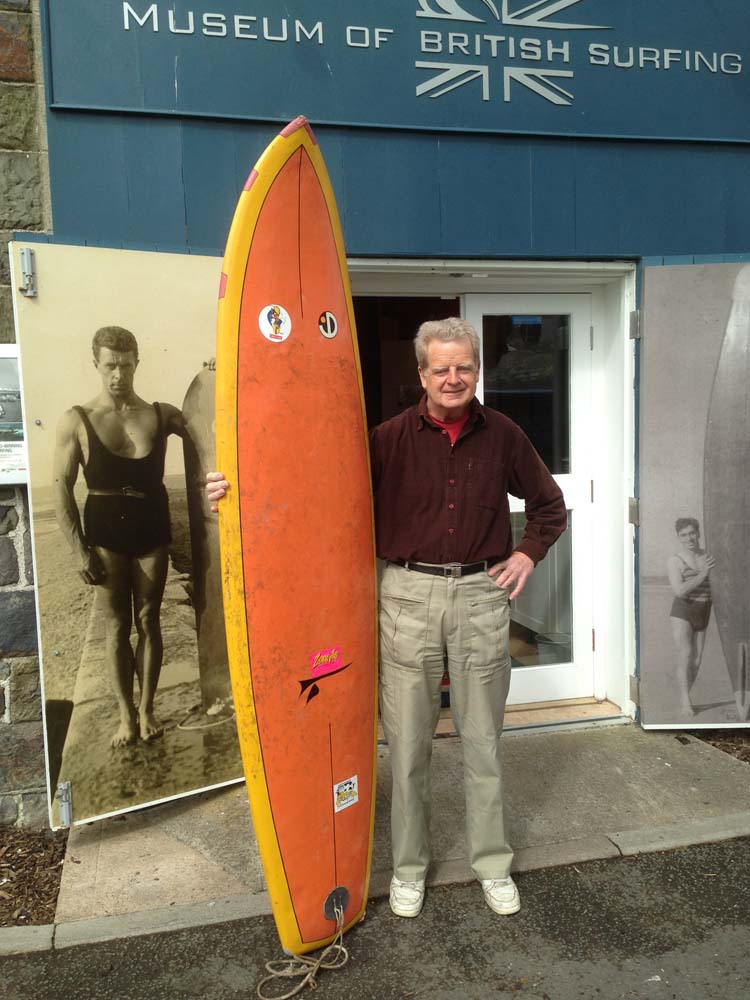 A visit to the new exhibition Sixties SURFER! prompted Braunton based surfer and photographer James Davis to track down and donate his first surfboard to the Museum of British Surfing.

He had the 7′ 8″ single-fin custom shaped by John Taylor in Bristol in the late Sixties at the start of the ‘shortboard revolution’.

Taylor got into shaping boards after visiting North Devon on surf trips and used foam blanks supplied by Bob Groves on England’s south coast, and also some Bennett and Tiki blanks. “I used to make 3 or 4 a week after work and sold them off the car roof at Woolacombe and Putsborough for £39 and would make about a tenner on each board,” said John.

On his later boards John glassed in a metal loop near the fin so that boards could be locked to a roof rack to prevent theft.

The board James Davis had shaped features his own JD logo, John Taylor’s artistic surfboard logo and an original 1960s Rick Griffin ‘Murphy’ sticker. The gel coat is orange, with yellow rails and it has a glassed in fin. It still has some original repairs made using ‘gaffer’ tape! The leash was added in the early 1970s along with surf stickers for Bude’s Zuma Jay and Sick Pig.

James had learned to surf in Waikiki and was eager to try out the waves on the North Devon coast when he returned to England, he thinks the board was shaped around 1968. He used the board for a few years before passing it on to his best friend David Russell in the 1970s, who had kept the board tucked away until now. James also donated a rare 1976 Morey-Doyle 136 soft surfboard in great condition that we’ll feature soon.

It is the second John Taylor surfboard to be donated to the museum’s permanent collection. It is another 1960s board shaped for Ronald Stuart and donated by Tim Wilson from Jersey  – currently on display in the new exhibition Sixties SURFER! at the Museum of British Surfing.

The museum’s permanent collection is held in trust by our registered charity. We are currently looking for British surfboards and memorabilia right the way through from the early 1900s to the present day – if you have something you would like to donate to create a legacy of your own surfing history please get in touch.