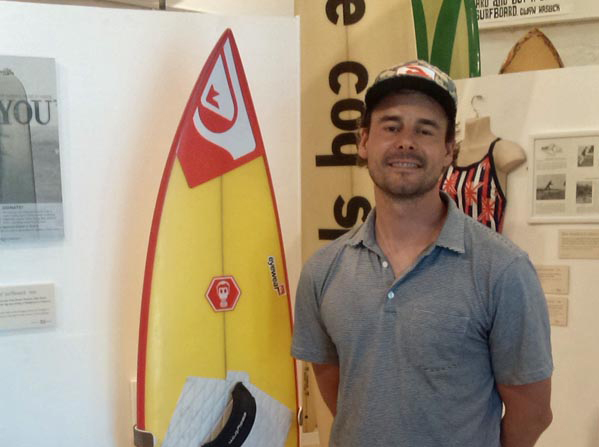 If you’re looking for things to do during your summer holiday in North Devon, make sure you follow Gabe Davies’ example and visit the Museum of British Surfing’s acclaimed surfing pioneers exhibition!

Gabe (pictured) is seen here with his specialist big wave ‘tow-in’ surfboard that he donated to the museum collection. He used the board to pioneer riding some of the biggest waves ever ridden off the coast of Ireland. The four times British champion was interviewed as part of ‘The First Wave’ oral history project which is now showing at the surfing museum in Braunton.

He visited with his wife Lauren, an acclaimed author and screenwriter & six month old son Bo Reef: “What a beautiful and thought provoking space,” said Lauren. “Such a fantastic selection of exhibits and stories!”

The Museum of British Surfing is now showing its third major new exhibition ‘The First Wave – surfers & their stories’.

This exciting display has touch-screen units so you can find out about British surfing history from those who were there, including interviews with people who were surfing here almost 100 years ago! A new eight minute film about UK surf heritage has been produced and is showing on a loop on a special screen.

You can see action & hear stories from famous British surfers like big wave experts Andrew Cotton and the late Viscount Ted Deerhurst who became the UK’s first professional surfer back in 1978.

Surfboards and other items have been selected that help to tell the story of surfing in the UK, and for the first time we have added QR codes to items on display so you can find out even more information on your smartphone.

Don’t forget, children aged 16 and under now go free (when accompanied by an adult), which means it is cheaper for families to enjoy our surf culture and heritage displays. There’s great kids activities like the ever popular spotter’s trail, and the chance to play pinball on our original 1970s surfing themed pinball machine!

You can get active & stand the chance of winning a fab Ollypop Surf towel & DVD! Simply don some of our retro surf gear & have someone snap a pic of you popping-up in your best surf stance on our special surfboard mat, post it on the Ollypop Facebook page and you can be in with a chance of winning a prize in June, July & August 2014.

At the end of each month the team at Ollypop will choose their favourite photo & caption and will get in touch to give you the good news. Please make sure you mention the Museum of British Surfing when you enter.

You can use our free wi-fi at the museum to upload photos straight from your phone during your visit. We look forward to seeing you in 2014!