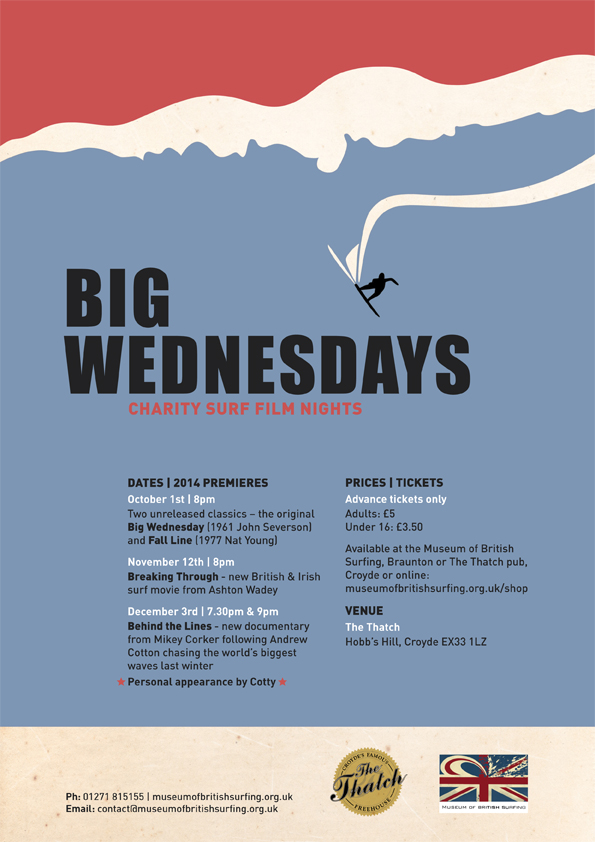 Join us for Big Wednesdays – a series of monthly surf film premieres this winter here in North Devon this Autumn & Winter!

Once again we’re teaming up with The Thatch pub in Croyde & their legendary movie room, with the big screen & pumping sound system provided by Chris Burrows from the world famous deckchair cinema for the full movie experience. These charity film nights help to raise vital funds to support the work of the Museum of British Surfing celebrating our amazing surf culture.

Advance tickets only for all events are available now online by clicking here, or drop-in to the Museum of British Surfing in Braunton now or The Thatch in Croyde to get yours from Monday September 22nd.

First up on Wednesday October 1st (8pm) we have two previously unreleased classics – the original ‘Big Wednesday’ released by the founder of modern surf publishing John Severson in 1961. He named the movie, later copied by the Hollywood blockbuster, because of the number of classic days that seemed to fall on Wednesdays. When he shot the film, the finale in thundering surf at Waimea Bay in Hawaii fell on a Wednesday!

The film was long thought to have been lost, until a collector unearthed the original reels and transfer them to DVD and sent the Museum of British Surfing a copy. The original sound track didn’t survive so it is set to music.

Alongside this we’re showing the seminal movie by Australian legend Nat Young ‘The Fall Line’ from 1977. Again never released commercially, this film explores Nat’s theories on the similarities of what he called “gravity sports”; surfing, skiing, paragliding, skateboarding. It is a truly beautiful movie complete with original commentary from Nat & groovy soundtrack! You’ll leave feeling stoked for sure.

On November 12th (8pm) we are premiering a new British and Irish surf film by Ashton Wadey and Jimmy Witson Productions called ‘Breaking Through’. It has been brought together by a veritable who’s who of surf filmmaking, including Mr B, Tim Boydell, Fionn Rogers, Danya Schwerty and Ashton Wadey.

They will take you on a journey to beautiful surfing locations around the UK and Ireland and give you an insight into the often harsh conditions endured by the surfers searching for those magic moments among perfect waves. The evening will have another short film as support.

Finally in 2014, it is the big one! Yes – another stoke-filled evening with Britain’s world famous big wave surfer Andrew Cotton! On December 3rd we have the premiere of Mikey Corker’s epic ‘Behind the Lines’ series brought together for the first time as one film.

Shot over last winter when Cotty caught the wave that pretty much the whole world though should have been a world record for Britain. See the film and talk to both Andrew Cotton and Mikey Corker about their experiences over an epic season.

Please note we have TWO screenings – 7.30pm and 9pm – so that children can come along to the earlier show.

Massive thanks goes to our volunteer Ella Veillet for creating the fantastic artwork and fabulous poster for Big Wednesdays!

2015 films & dates will be announced before Christmas. See the slideshow below for more images & posters.