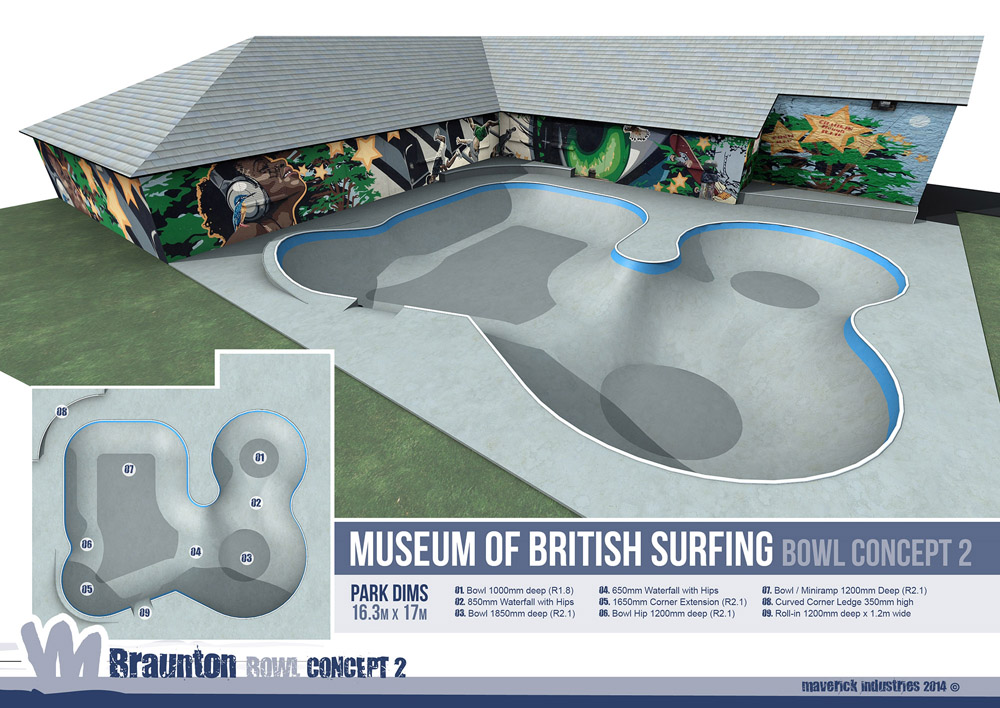 The Museum of British Surfing has unveiled plans to redevelop Braunton Skate Bowl & transform it into a top class facility.

The ambitious project was given provisional approval by landlords Braunton Parish Council at a meeting last night – the next stage is to apply for formal planning permission and to find grants & other sources of funding to make it happen.

It follows a tender process which saw one of the UK’s leading skatepark builders, Mavericks Industries from Dorset, selected as the preferred contractor. The cost is likely to be in the region of £85,000 – £100,000 depending on the final specification.

The existing Braunton Bowl created almost a decade ago is now starting to reach the end of its useable life, and is no longer cost effective to repair. The Museum of British Surfing first stepped in to save the bowl from closing in 2011, when the previous management group gave up – now it plans to more than double the size of the skating area.

If everything goes to plan, it’s hoped the new bowl will open next summer, with construction work taking place over the winter and spring. You can see the initial concept drawings below – consultation with users has been taking place on site and on the bowl’s Facebook page and will continue over the coming weeks as the designs are fine tuned.

The new bowl will continue to cater for for abilities & ages, but it’s hoped it will also attract visiting skateboarders from all over the UK and abroad – and be a place where competitions & events can be held.

The Museum of British Surfing provides Braunton Skate Bowl free of charge to the community as part of its public benefit as a charity. Skateboarding was invented in the 1960s by surfers as a way of training when there weren’t any waves so it is a perfect fit with the museum – as far as we know it’s the only museum in the world with its own skate bowl!

With Braunton Youth Club now set to close due to county council cuts later this year, the museum believes it is important to offer top class facilities for young people in our area. In addition to investing in the skate bowl we have put forward a proposal to take over the youth club building when it shuts this Autumn and turn it into a new community space so that charities and other groups can come in and still provide drop-in sessions for young people in the village to fill the gap when the existing club goes.

The surfing museum is now in its third year of operation, each year it runs major new exhibitions – this year it is called ‘The First Wave’ and is all about British surfing pioneers. It costs our charity almost £1,000 a year to run the skate bowl & maintain the building with things like public liability insurance and repairs – we urge everyone to visit the museum as this will help us keep the skate bowl & youth club running.