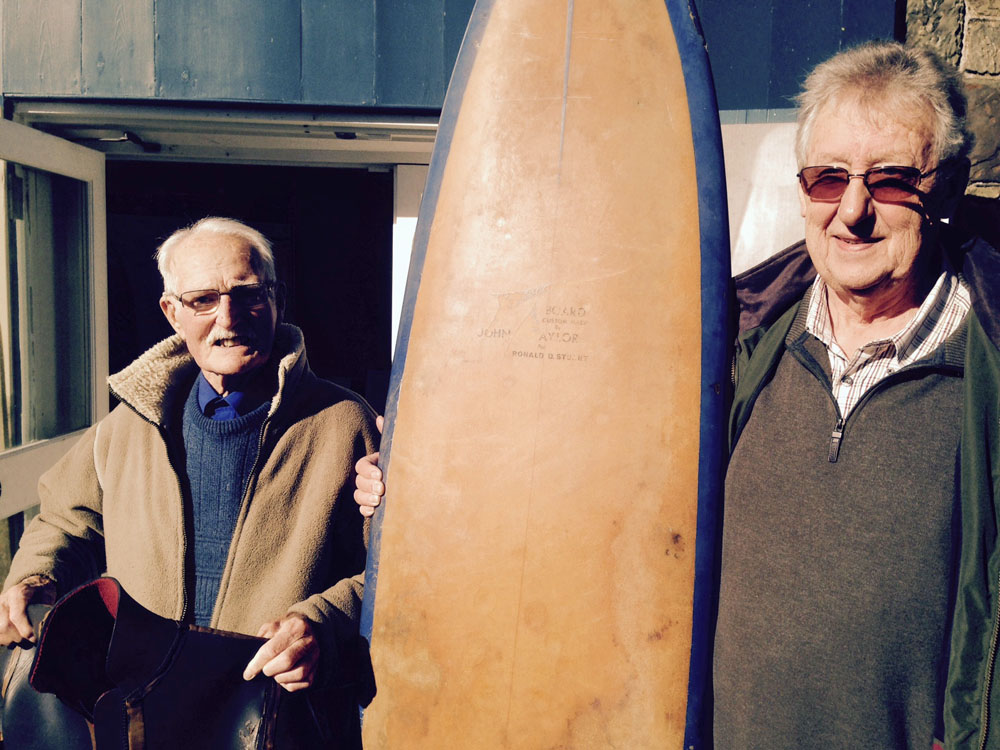 It has been around 45 years, but today surfer Ron Stuart has been reunited with his original surfboard – thanks to a special event at the Museum of British Surfing in Braunton.

Ron Stuart, who is 87 next month, had the board made for him by John Taylor from Bristol in 1968. Taylor used to bring boards down on the roof of his car at weekends and sell them to surfers in Woolacombe, North Devon and take orders ready to bring down more the following week.

Ron sold it to a friend after a couple of years of use, and hadn’t seen it again until now.

“It is amazing to have this living history, that breaths new life into exhibits from our collection,” said museum founder Peter Robinson. “Shared stories sparked by special reunions like this give new memories to those involved and their families. It is what our current exhibition ‘The First Wave’ is all about – surfers like you & me telling their stories.”

The board was donated to the national surfing museum by Tim Wilson from Jersey, where the board had ended up, but at the time no-one knew anything about the shaper or the surfer. First the museum’s researchers found the shaper, ex rally driver John Taylor who still runs a garage business in Bristol.

Then by chance Braunton surfer Rob Martin saw the board on display, and said he had known Ron Stuart and his family for 35 years and put everyone in touch!

Today Ron’s son Gary brought him up from Newquay where he now lives, and they were joined by the original shaper John Taylor, family friends Allan Gower and Rob Martin, James Davis who also had one of John’s boards from new (also now in the museum’s collection), surf museum volunteer Andy Webb who was friends with John back in the day, and  Al Atherton who was also one of the hardcore Devon crew of that era.

It is now thought that Ron sold his board to a friend in the hairdressing business who moved out to Jersey. The board has ‘registration’ stickers on it from the Channel Islands dating between 1973 and 1983.