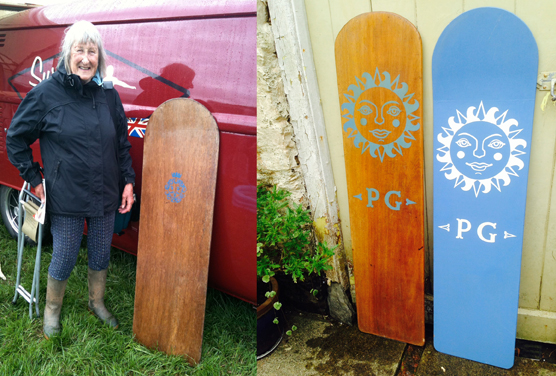 Pamela Gott caught her first wave at Saunton in North Devon as a young woman in 1945, now 69 years later she has donated her original wooden surfboards to the Museum of British Surfing in Braunton.

She came to visit our acclaimed 2014 exhibition about British surfing pioneers – ‘The First Wave’. Pamela’s boards are decorated with a painted sun and her initials. The blue one with white art has a curve in the nose and dates from around 1961, while the plain wooden one with blue art is completely flat and is believed to be earlier.

Her brother Leonard Fowler wrote a booklet on surfing in the 1950s that was illustrated by Mrs Gott (née Fowler) who still lives near Barnstaple. Pamela thinks it might have been  ‘A practical guide to surfing’ which was sold alongside bellyboards by the late Dick Pearce (Charles Pearce & Sons, South Molton), although it could have been ‘Surf riding made easy’ which was a very similar publication. We’ll update this post if we can establish the correct information from more than 60 years ago!

The Museum of British Surfing’s permanent collection is held in trust by our registered charity (1131433). We’re currently looking for vintage British surfboards and surfing or beach memorabilia right the way through from the late 1800s to the present day – if you have something you would like to donate to create a legacy of your own surfing history please get in touch. We’re also looking for an original copy of the 1950s booklet mentioned above ‘Surf riding made easy’.

The main photo shows Pamela Gott visiting the Museum of British Surfing stand at the North Devon show in 2009 with one of our boards, and the two bellyboards she has donated to our collection. The picture below shows the cover of the surfing booklet